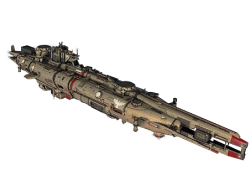 "Destroyer ‘Brave’ was developed by a team of talented civil engineers commissioned by the Ministry of Defense of the Empire. The design bureau had initially planned to deal only with projects for peaceful times. Unfortunately, in a state of war the Empire was not ready to allow such spending. Engineers had to resort to various tricks — they combined their civil projects with the development of the new destroyer. This made the Empire reconsider its spending. The project was a success. The new destroyer passed all the tests with flying colours and was swiftly adopted. To the delight of pilots the destroyer had a comfortable cabin, just like civilian ships."