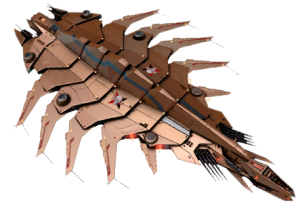 There have been many rumours about Technologists, the tech geniuses from Jericho. Only one thing can be said for sure — they're gone. Gone without a trace. Artificial intelligence remained after their exodus. It called himself the Sentinels and took control of the Jericho sector.

Although the Alien invasion was declining, their portals remained a problem, and the Sentinels assembled a special model of the ship to keep an eye on them.

In all the chaos that the galaxy is now, the production of new ships is not that active. Therefore, the Sentinels, who actively contact and support the victims, offered Custodian blueprints to the UMC. Especially for mercenaries who are trying to somehow maintain order in the sectors, the AI changed the original design of the ship so that it could be controlled by a person.

Launches spherical plasma charges. Holding the trigger accumulates charge, boosting projectile speed and damage. When holding the trigger for a long time, plasma explodes around the ship, dealing damage to host and enemies nearby.

Temporarily boosts flight speed, but reduces shield resistance. When the module is active, the ship is invisible to radars. Shooting and using modules interrupts the effect.