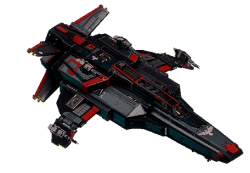 The GK-4 Dainsleif attack fighter is an experimental pilot training ship. The first batch of these ships entered the ranks of the Steel Legion shortly before the First Invasion and are currently operated by the Legion soldiers.

Imperial engineers made the main bet on the ship’s improved special module. Forcing SEF systems has a reduced recharge time. Additionally, the ship's thrusters were modified.