Difference between revisions of "Gargoyle" 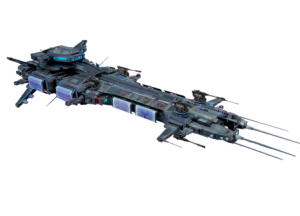 Long-range Empire frigate Gargoyle offers pilots additional options that make the ship a formidable opponent even for ships of higher ranks and enable you to adapt the vessel to conditions of skirmish, missions or open space. The unique special module ‘Synergetic disintegrator’ deals additional thermal damage to frigates and destroyers and the enemy's rate of fire on hits. ‘Boson Cannon’ deals damage to several enemy ships! Active module ‘Disintegrator modifier’ significantly increases the main weapon's rate of fire and it is perfectly complemented by the 'Dual-channel repeater' modifier, which increases the disintegrator charge speed and the main guns firing rate at the expense of killed enemies.

For centuries, the Wardens have been protecting the Emperor and he never spared funds for arming the order. The best minds of the Empire gathered in the solar system to develop ships and the best weapons.

Originally created for parades, the Gargoyle frigate quickly grew to be the main defensive ship. Unique features allowed it to surpass Chiron, used by the Order earlier. Links of Gargoyles stood on the outskirts of the Solar System and frigates covered any enemy ships with constant fire of disintegrators. Moreover, the ship was considered divine, because the Emperor’s hand touched its engineers.

Unfortunately, despite the excellent armament and excellent pilots, the order was unable to contain the Alien attack. But mercenaries say that they still see a wing of these frigates in remote sectors. But whether they belong to the Wardens is not known.