Difference between revisions of "Pilgrim" 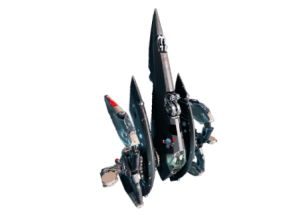 The inhabitants of Jericho made pilgrimages to the Monolith for centuries. Even the invasion and the ban on flights to this zone could not break this tradition. However, it became truly dangerous to travel even for short distances. Nevertheless, there were enough of those willing to put their lives at risk to get to the main shrine. Representatives of the more prosperous Jericho class risked money in order not to risk their heads. Their own. A new tradition appeared and quickly took root among the top Jericho Families. The patriarchs would only venture on a pilgrimage under the protection of mercenaries, who charged an incredible amount of credits for their services.

So a few years ago Pilgrim was constructed with the money of caring patrons. A model designed to protect pilgrims. In order to make flights in turbulent times for the galaxy, the ship was equipped with a camouflage generator and rapid-fire weapons, while a lot of effort was put into the shield system. Grateful patriarchs sometimes gave it as a gift to their most faithful servants for conscientious service.

Just recently, Pilgrim became available on the market. The reason for the sharply increased popularity of the ship was not mass passion for pilgrimages. The model was appreciated by the UMC mercenaries who found a new use for it — in battles. In their hands, the ship turned out to have a much wider functionality than the designers had originally intended.

If the target dies shortly after a hit, its death generates an explosion.

Launches a missile, which generates a shroud on hit or when activated. All the ships inside it can not be detected, but they can not use the radar.

Constantly increases the speed and acceleration of the ship. Gives an additional bonus at low shield integrity. You can place only one modifier.