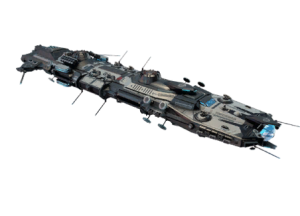 Only six months after Sol-X Inc's bankruptcy it was revealed that the corporation had been spying on Federation shipyards in favour of the Empire. By that time an incredibly valuable database with all the information about the Federation ships was sold at an auction. The buyer, a private investor, was soon pronounced dead under mysterious circumstances. Further fate of the Sol-X database is unknown. Recently, a previously unknown Procyon corporation presented the eponymous destroyer. Despite the fact that most experts are inclined to believe that Procyon was built thanks to the Sol-X databases, the authorities were unable able to present the corporation any charges. With its hightech destroyer, the corporation has easily won the state tender.