Difference between revisions of "Protazan" 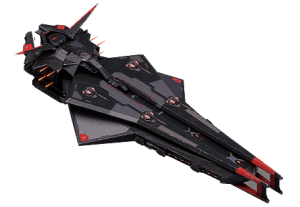 Protazan is the newest ship of Liu and Mendes families created as a response to the strengthening of the New Empire and the Federation fleets. The excellent combination of weapons and defense systems makes this ship one of the best in long-range frigates class.

Work on the project began in 4619 almost immediately after the first Relic prototypes were created. The new frigate was supposed to be a support ship for the new destroyer, but later its role was greatly expanded. In the first months, work on the project went slowly. The lack of experience in the field of long-range ships was a factor. The engineers decided to invite the Liu Family to join the work on Protazan. With the arrival of Liu, scientists received a huge amount of technical documentation on both the old frigates and new developments of individual nodes. The merging of the knowledge and production capacities of the two Families gave the project a new life. The frigate’s arsenal has been replenished with new torpedoes and weapons, with which Protazan is capable of destroying any target.

During the tests, a squad of several ships completely destroyed the defensive fleet of one of the cyber bases. Soon after, the shipyards received blueprints for Protazan’s mass production. Currently, Mendes’ trusted mercenaries can get a special version of the ship for testing. Family engineers carefully collect data from every battle, even the most insignificant one, and analyze it. UMC is an indisputable assistant in this business.

The weapon is able to accumulate a charge to increase the strength and speed of the projectile, but cannot hold it for too long. Reinforced projectiles have an increased temperature and are able to reduce the hull’s resistance to thermal damage. Effect stacks.

While the module is active, damage and range of the main weapon are increased, but the shield’s resistance to all types of damage is reduced. After the module is disabled, the shield will remain vulnerable for some time.