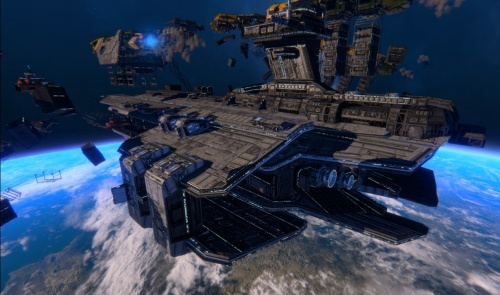 It is in this sector that one of the most famous shipyards of “Blackwood” corporation is located. And it became famous because this is where the AI “Ariadne” was developed, which launched its creators to the world market.

Ironside's fighters are planning an attack on the “Ariadne”. If they can figure out how to completely control it, it could be the beginning of our end.

The empire cannot send its forces right now, so it offers a contract to all mercenaries. You need to protect the “Blackwood” shipyard from the attack of bandits.

To complete a mission, you must complete a sequence of goals. Mission supervisor is Eric Holst.

Goal №3 - Take down the experimental 'Punisher' prototype ship. The integrity of control stations does not matter.
'Punisher' uses the module Boarding charger.

On the third, the summoned reinforcements consist entirely of strong enemies.

Punisher uses an extremely powerful pulsar that deals thermal damage to all mercenary ships at any distance. Its frequency of use is low. You must hide behind an obstacle to defend against it. There will be an alert before the attack.