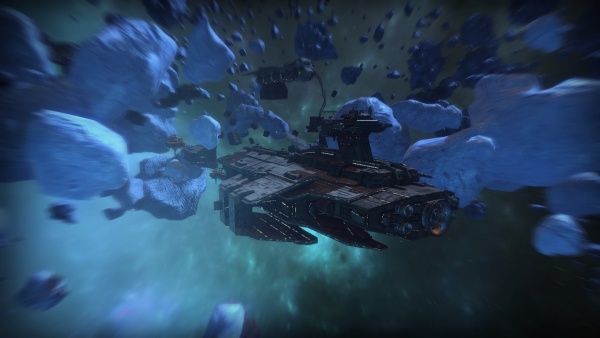 The asteroid ice belt of the Olympus system has long been the anchor for a damaged dreadnought. According to the official version, it was abandoned by its team during the invasion because of the threat of destabilization the reactor.

The Cartel firmly established itself in the system and now they are trying to fix the dreadnought in order to use it for their own purposes. The management of the “Helion” military company offers the mercenaries contracts for sabotage of repair works.

But UMC analysts assume that the contracts of “Helion” act as a cover an attempt not to allow the Cartel to hack the data obtained in the last campaign and stored in the specially protected areas of the ship's artificial intelligence memory.

To complete the mission, you must complete a sequence of goals. The mission supervisor is Rolf Briggs.

Goal №1 - Destruction of defensive structures. It is necessary to destroy the missile defense of the dreadnought - turrets (6).
Enemies - appear infinitely small groups at a certain time, in the missing amount to a single maximum.

Goal №2 - Disable power generators of protection systems (3 pcs.). One of them is covered by a shield, to disable which it is necessary to destroy the field generator.
Enemies - appear infinitely small groups at a certain time, in the missing number to a single maximum.

Goal №3 - Reflection of the counterattack. It is necessary to destroy the ship of the enemy leader.
Enemies - appear in groups, at the very end - the flagship, destroyer with powerful weapons.

On the first stage LRFs are recommended for sniping down the turrets, the second stage, Recons are best for beacon capture, as for the last stage, Engineers are advised for their healing abilities.