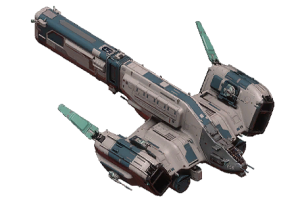 Despite problems with the Hammerhead project, the leadership of the Outpost shipyard decided to continue cooperation with Armada. The army needed a universal frigate and engineers began work.

After several months of work, the Raven guard frigate was ready. In addition to the main model of the ship, the Outpost shipyard has also established the production of a cargo version of the frigate.

Speed combined with excellent combat power allows Raven to go on the offensive together with advanced fighter squads and also quickly escape the battlefield. And thanks to a unique special module, the crew is safe from an enemy attack when retreating.

Currently, the Outpost shipyard has sold the blueprints to UMC in order to make additional profits in case of problems with Armada. From now on, all mercenaries can assemble a Raven for personal use.

Releases plasma spheres. Holding the button charges the weapon, increasing the damage of the projectile and reducing its size. The projectile is released automatically when the button is held for a long time.

When it hits an enemy, creates an energy coupling between it and the player's ship and drains target's shield. During operation, the harpoon attracts the enemy.