Difference between revisions of "Resistance"

It is commonly known on how resistance affects dmg reduction, there is a Dev’s blog about it, there are formulas floating around, there is a Ship stat window that shows you dmg reduction, but what does it actually mean? People keep using definitions of diminishing returns and how resistance loses its effectiveness above certain level, thing is it is not exactly true, these are a half truths.

Resistance never loses its effectiveness in its own, it scales linearly and each point of resistance gives you exactly the same amount of survivability no matter how much of it you already have, but when taken into equation with HP points, depending on numbers one will provide more than the other.

Outside of Armadillo implant that is not a part of this wall of text, HPS and HPH use the same formulas in relation with resistance and dmg taken, so i will be referring in general as HP

Resistance is the in-game attribute that is used to calculate Damage Reduction. Higher Resistance value corresponds to less incoming damage.

DR is how much, by percentage, incoming damage is reduced. For example, a DR value of 25% reduces one-fourth of damage. DR increases with resistance.

DR is how much, by percentage, incoming damage is reduced. For example, a DR value of 25% reduces one-fourth of damage. DR increases with resistance.

Here are some formulas that are the most primal building block of effective health. 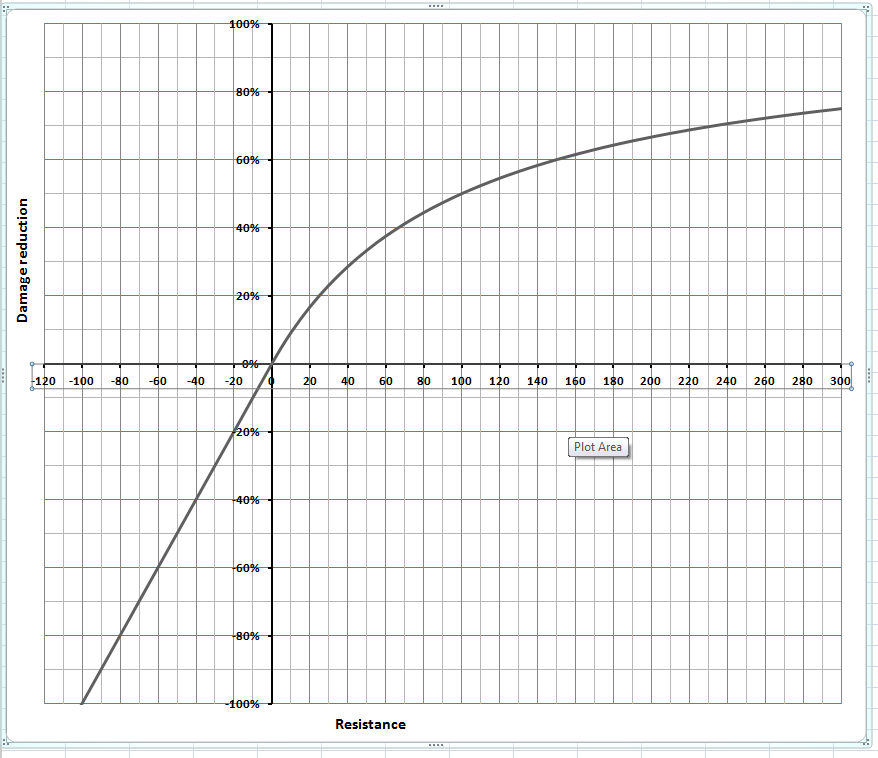 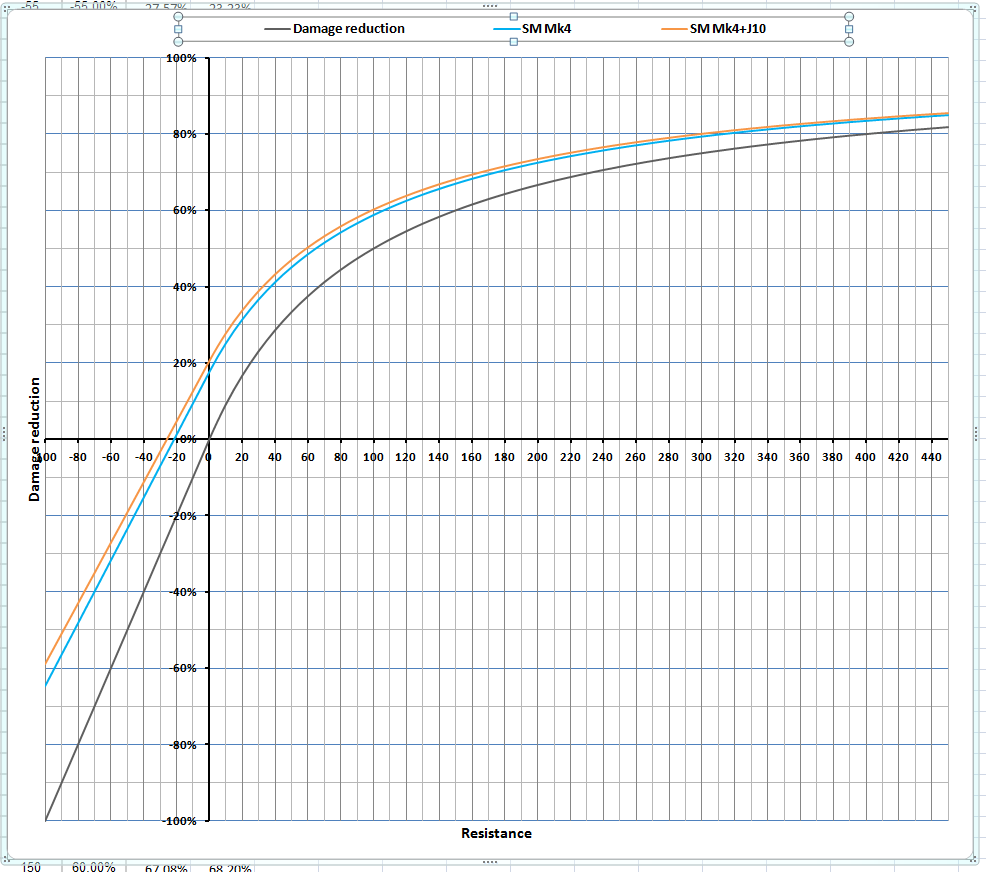 This section identifies the "sweet spot" where target painter and implant Oculus II have the biggest effect. You can also see that TP and Oculus II still maintain usefulness even into the negative resistance range.

Damage Amplification will be defined, for the sake of this guide, the rate of change of the Damage Factor with respect to Resistance, divided by the original Damage Factor. It is essentially the increase of damage on a percentage basis.

For example, the enemy has a resistance value of 100 and you intend to decrease it by 29 (t3 mk4 Target Painter). 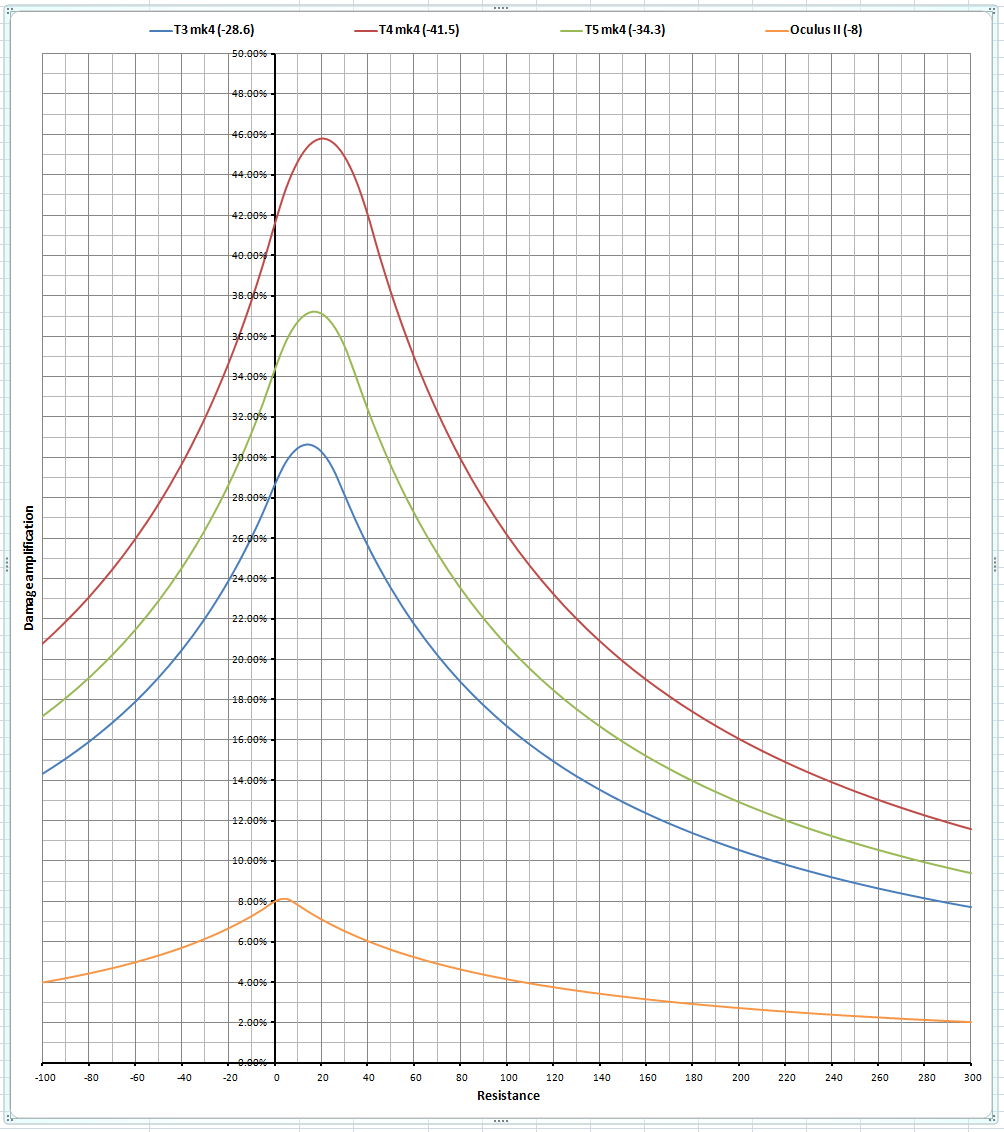 Effective Health and Linearity of Resistance

Effective Health, or EHP, is another commonly referred to factor along with Damage Reduction. EHP is more meaningful to reality however, as explained in the definition below.

EHP is the amount of unmitigated damage you can take before dying. For example, it takes 20 shots of 2000 unmitigated damage to kill a target with 40000 EHP. Due to this direct relation to unmitigated incoming damage EHP is the single best measurement of survive-ability (ignoring agility, maneuverability and dodge factors). Both HP points and Resistance contribute to the calculation of EHP. 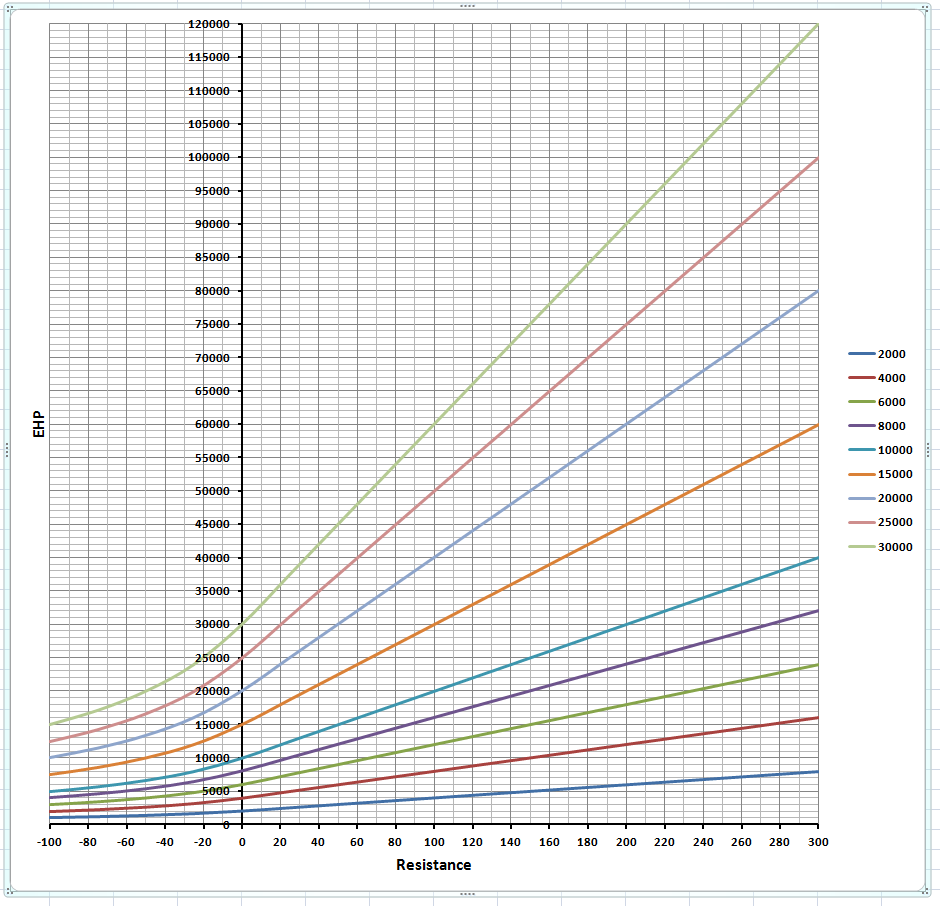 As shown in the graph, the benefit of resistance is purely linear for positive values even though damage reduction is diminishing.

Every additional point of resistance gives the same benefit as the point before.

In SC healing is done by flat number not by percentage of your current HP pool, Hull boosters, auras, passive regeneration modules all heal a fixed amount of HP, meaning that if you have huge HP pool, it will take much longer to recover and you will be getting less benefit from healing during the fight than a someone with low HP pool but higher resistance:

Both of them are under healing receiving 600 hp/s and were dropped to 1 HP so they have to recover 99.99% of their tank

Another major part in ships survivability plays the Hull boosters, that pretty much mandatory on majority of ship. Since it is a simple healing, same logic applies - lower HP pool+higher resistances will benefit and recover much more from activating a module, than high volume+low resistance builds. Which allows to stay in the fight longer and after calculating incoming heals have higher total EHP at the end.

Both of these builds are fairly common in game, with slight variation to shield module. Active modules are pretty much standard and that is what you going to see on 99% good Engineers these days.

Base stats, no modules 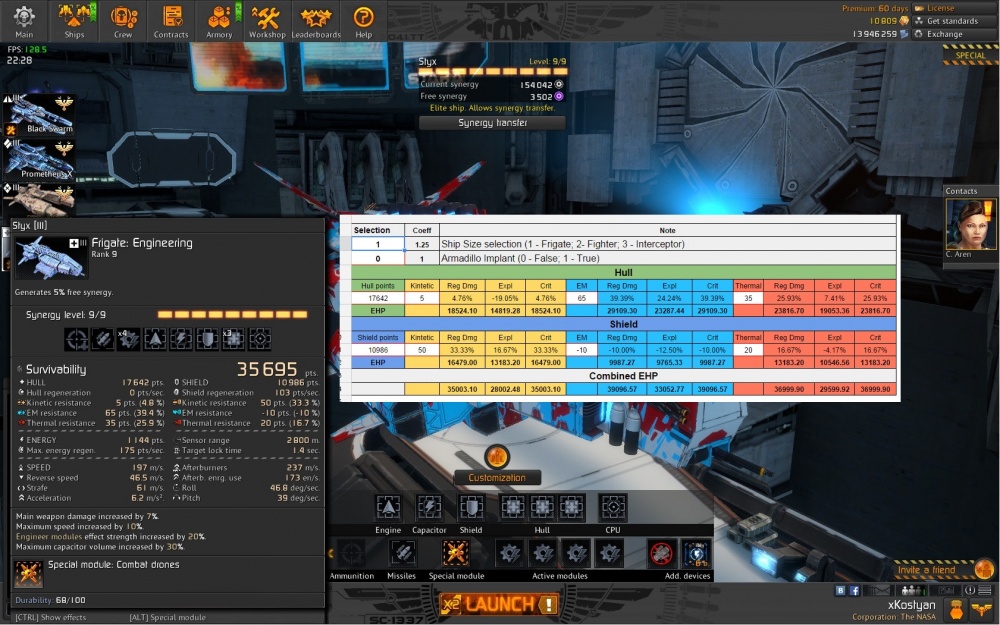 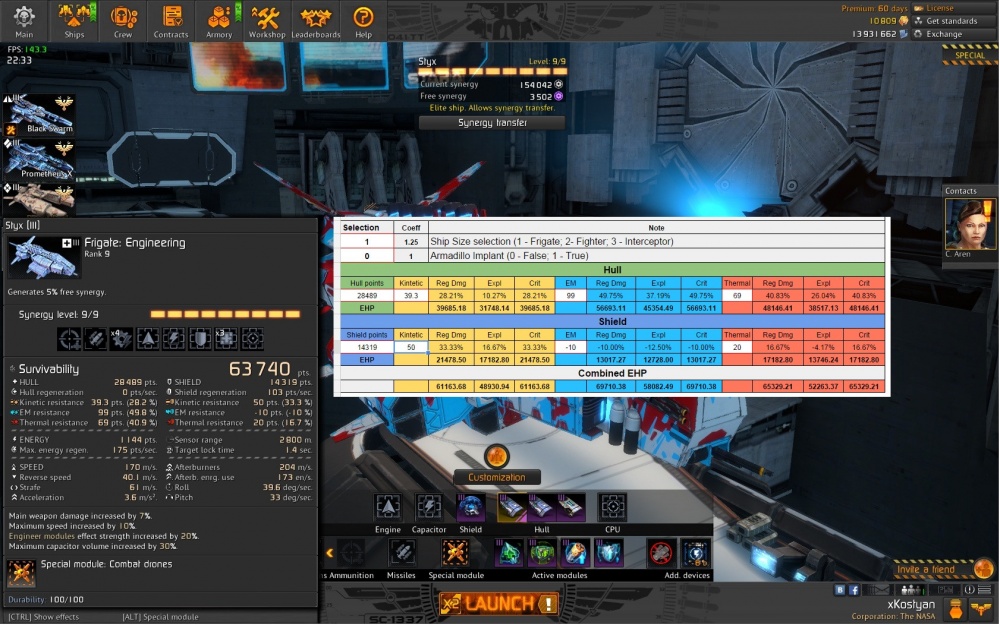 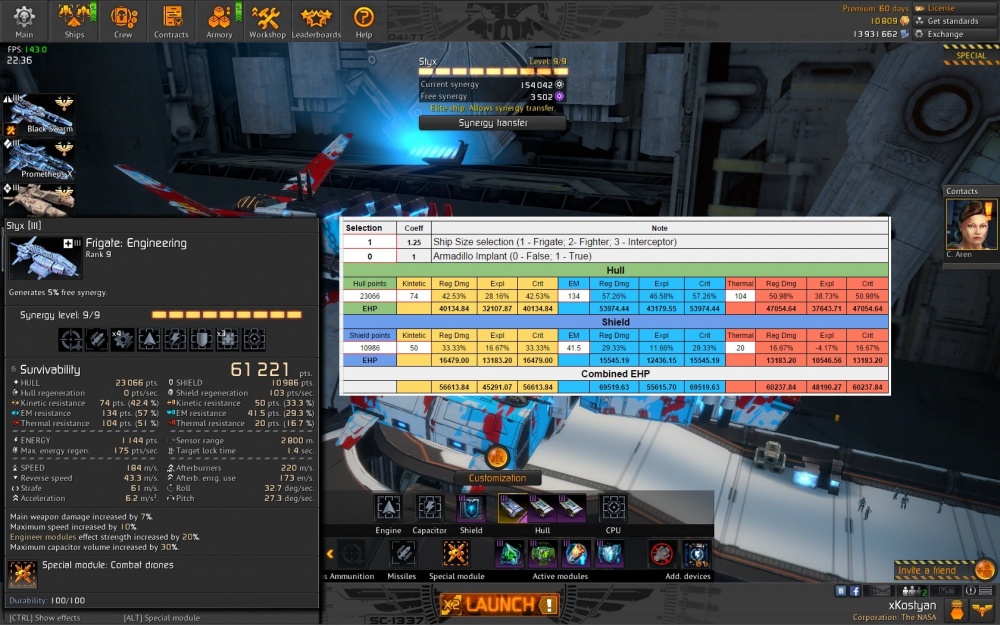 As you can see the final difference between Hull EHP of B2 and B3 is minimal, well within 1 extra shot of a Gunship weapon of each type. For Shields EHP there is a slightly bigger difference, but it comes with acceleration penalty.

So if Styx gets jumped by a Gunship (assuming 100% accuracy, ignoring explosion maulus of a frigate and ignoring incoming healing) it would take almost same amount of time to take down B2 and B3 to zero, with B2 able to tank 1-2 extra hits.

But now if you look at Dmg amplification graph and see how much Target Painter T3 mk4 will affect you:

So it takes 13 seconds longer to fully recover Hull points for B2 over B3, not much, but that is 25% longer, now scale it through the whole game.

As you look at how “good” Engineers play, they dont #YOLO charge into the prey (well sometimes :)) but they manage the dmg they take - recover - take dmg - recover - take dmg..., and there is a clear advantage in recovery part in B3. And that is if there is no Tackler, where difference goes wider.