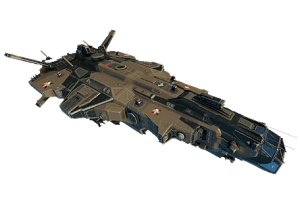 During the survey of one of the abandoned Legion bases after the invasion, the New Empire discovered several prototypes of the newest engineering frigate, which never came into operation. After a year of work, Scylla was ready. The first tests showed complete superiority over the other engineering frigates of the Empire, and the ship joined elite units of the fleet. Now, however, the New Empire is ready to hand over the blueprints to UMC so that all mercenaries can experience the power of imperial technology.

Launches a combined warhead missile. After detonation, a station is activated, restoring shields and hulls of ships.

Enhances hull and shield regeneration of allied ships in a small radius. You can place only one modifier.