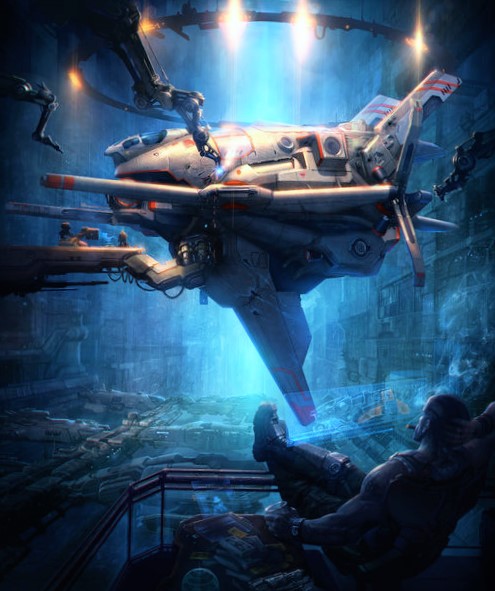 A spaceship is a complex machine and consists of several main parts. The sum of these parts is the totality of the Tactical and Technical Characteristics of the ship (TTC). It is highly recommended to display "Full Ship Information" in the game settings in order to display all the parameters of a selected ship in the hanger.

The hull is the basis of the ship, on which all the other components, modules and weapons are mounted. The main parameters of the hull are:

The ship's Shield is an energy barrier that protects your Hull from damage. The enemy’s weapons primarily cause damage to the Shield (except for certain weapons and modules that ignore Shields), and the Shield must be destroyed first before damage to the Hull can occur. If the "charge level" of the Shield reaches 0, then any further damage is applied to the Hull. The Shield is also able to resist damage, like the Hull, and the charge level of the Shield is able to automatically recover (regenerate). Regeneration is constant, but can slow down or accelerate under different influences. The main parameters of the shield are:

The engine is a complex system that allows the ship to move in space and maneuver. The engine is divided into several parts:

The ship's Capacitor is designed to store energy, which can later be spent on the needs of the ship. The capacitor has two main characteristics:

The ship's computer is responsible for finding and tracking targets - enemy ships, drones and other objects. The computer has the following main characteristics:

The class of the ship determines the size of the ship, its speed and maneuverability, the number of slots for modules and weapons. The game features the following classes of ships:

All ships in the game are divided into ranks. The rank determines the relative strength of the ship. As you play, the player gains reputation as a reward for fights and completing objectives. When a certain reputation level is reached, a player gets to the next rank and can access the ships of that rank.

Ranks were previously grouped into threes. Three ranks were one technological level - a tech - T (except T5: ranks 13-17). Ships of different ranks within the same tech have fairly close performance data. The difference in the performance characteristics of the ships of two different techs is much more significant. Until now, the special operation was divided into 3 techs.

The role system is designed not only to make it easier for players to play the game in their favorite style, but also to make it easier for them to choose the ship that best suits them. Each role is associated with a specific set of unique role-playing modules and weapons, supported by specially selected parameters of the ship. Each ship class except for Destroyers have 3 roles.

An important stage in preparing a ship is equipping it with weapons and modules. When you buy a new ship, you get a pre-set with it, which includes weapons, modifiers, active and passive modules, as well as missiles and / or mines.

Each element of the ship's equipment is installed in a special slot suitable for this type of equipment. The number of slots available on a particular ship is determined by its rank. The characteristics of any equipment item are determined by:

The main armament of the ship are it's weapons. The weapons are mounted in rotating mounts that are attached to the hull of the ship. The number of weapons on the ship depends on its class and role. Weapon are divided into three different damage types. See the main page on weapons for details.

Ammunition can improve any characteristics of the weapon, sometimes providing a large bonus to one aspect of a weapon by weakening another characteristic.

The Missile Slot is for additional ship weapons. Self-guided missiles, unguided missiles, combat drones, mines, bombs and stationary barrier fields (for Destroyers) can be equipped here. The weapons or items in this slot is activated, by default, with the right mouse button. Some weapons, such as guided missiles, require a target lock.

The main difference between a special role module and an active module is that a special module is a permanent part of the ship and cannot be dismantled or replaced (the special modules on crafted ships can be customized by re-equipping). Role modules are divided into three types:

Modifiers of the ship are passive modules designed to improve one of the main characteristics of a ship: the Hull, Shield, Capacitor, Computer, or Engine. Ship modifiers are installed in their own special slots.

In battle, your ship may be shot down (destroyed). In this case, it receives an amount of "damage". If the damage level exceeds a certain point, then you will not be able to take this ship back into battle. Between battles, while in hangar, you can repair your ships. To do this, you need to click the [Repair] button. The cost of repairing the ship is displayed directly on the button. You can enable the auto-repair option. To do this, you need to check the box below the [Repair] button. In this case, the ship will be automatically repaired immediately after returning from combat or Open Space.

The ship returns from combat with used ammunition[2]. To refill the ammunition, you need to go to the hanger and click the [Ammo refill] button. Similar to repairing a ship, you can set up automatic-refilling of the ammunition.