Difference between revisions of "Sirius" 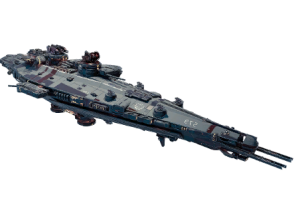 The first ‘public’ Sirius destroyer was designed and developed in the mega-popular show ‘The Shipyard’, whose ratings broke all records. Thirty engineers competed for six months for the right to be called ‘King of the Shipyard’, the outcome was decided by viewer voting. Military leadership initially could not believe the success of the project, but gave permission to use one of its shipyards, when producers collected the required amount of credits on a crowdfunding platform. To everyone's surprise, Sirius was not only a high-quality ship, powerful and reliable machine, but at also relatively inexpensive to manufacture. After the show, Sirius was put into service, and its blueprints were submitted to UMC. Currently, the producers are raising money for a second season of the project.

Deals damage over time to targets in range and temporarily destabilizes their engines. While the target flies faster than 30% of max. speed, deals extra DPS.