Difference between revisions of "Spiral" 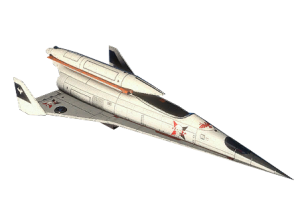 The space combat system ‘Spiral’ is the only representative of the legendary modular system of combat starships developed during the early stellar expansion of mankind. Blueprints and technologies of the unique modular system were lost during the formation of the Empire. The combat system has perfectly proven itself during the battles with the Revenant Order in the days of Direktorium.

The system consists of two combat modules that can function as a single unit, or separately. The detachable module can temporarily become a full-fledged interceptor, and then reconnect and use all the capabilities of the frigate.

Blueprints and technologies of the ‘Spiral’ system were lost at the end of the XXXVI century. They were rediscovered in the special facility of the ‘Spot’ object, found in the asteroid field of the star system SY3176-GIII-A4 by a special expedition from Erebus.

Makes the carrier and the ship of the chosen ally temporarily invulnerable and restores its shield over 6 s.

The ship becomes invisible and jumps forward. Invisibility can not be disabled for a certain time.

Places a mine with invisibility module. Activates when trying to get away from it, or on a timer.