Difference between revisions of "The Defiler"

Your squad has to battle The Defiler in just one stage. There are 4 outposts that are scattered around the map.

A unique, extremely tanky and dangerous mothership. The sole purpose of the mission is to destroy the alien mothership and to stop it from destroying the stations (optional), its health bar is displayed on top of the screen like a boss battle. It has a large pool of hitpoints and uses emitters with tracking projectiles that deal only EM damage. The best method is to start by destroying its emitters from a distance, it is not advised to be close to the mothership under 4000m. Shooting the Defiler and destroying the emitters will reduce its health triggering a retreat sequence.

It is recommended to use a frigate or a fighter, using a interceptor might prove to be very difficult as a little mistake can kill you. Taking destroyers as main damage dealers is highly recommended.

Best ship classes for the mission are gunships (any), commands (any), Empire LRFs, recons (any) and destroyers. The recommended weapons are the Halo Launcher (+ Photon Emitter), Singularity Cannon and any other fast firing EM weapon (for fighters and interceptors). Explosion weaponry is a key to success on this map - conventional weapons wont be able to do enough damage over time to take down the Defiler. When fighting The Defiler, explosive projectile weapons can damage multiple emitters and in the same time deal damage to the Defiler itself.

The mothership will spawn from an Alien rift/gate after the players destroy the first alien wave consisting of Hunters, Scouts and Biomorphs at the beginning of the mission, immediately after exiting the gate it will try to destroy the outpost and any players near itself. Recon ships are great for countering the alien gates that frequently spawn around the map by closing them. Dealing damage to the Defiler will trigger it's impenetrable shields and spawn a matter inverter on the opposite end of the map based on where the Defiler is located. Players need to take it down as fast as possible before it triggers a massive pulsar dealing tremendous damage to everyone everywhere. When the shields are down, players can continue their mission in stopping the mothership.

The ship will alternate between triggering its shields, spawning matter inverters and launching tracking projectiles at players (those projectiles have similar characteristics as misiles) until the mothership triggers a retreat mechanism and tries to flee. At that moment it's really important to destroy as many emitters as possible before the ship manages to flee which will cause the mission to fail.

It is advised to make a team with at least one or two engineering ships for healing the team members, one command ship for damage, resists and speed buffs, 2 or 3 recon ships to close the additional alien gates so no more aliens come through, guard ship/s for the missile shield against the tracking projectiles and, the last but not least, gunships or destroyers for the sheer damage purpose.

If the team manages to fulfill the mission objectives and succeed in stopping the Defiler, the mission will reward each player with 2 rare loot searches that can grant different amount of 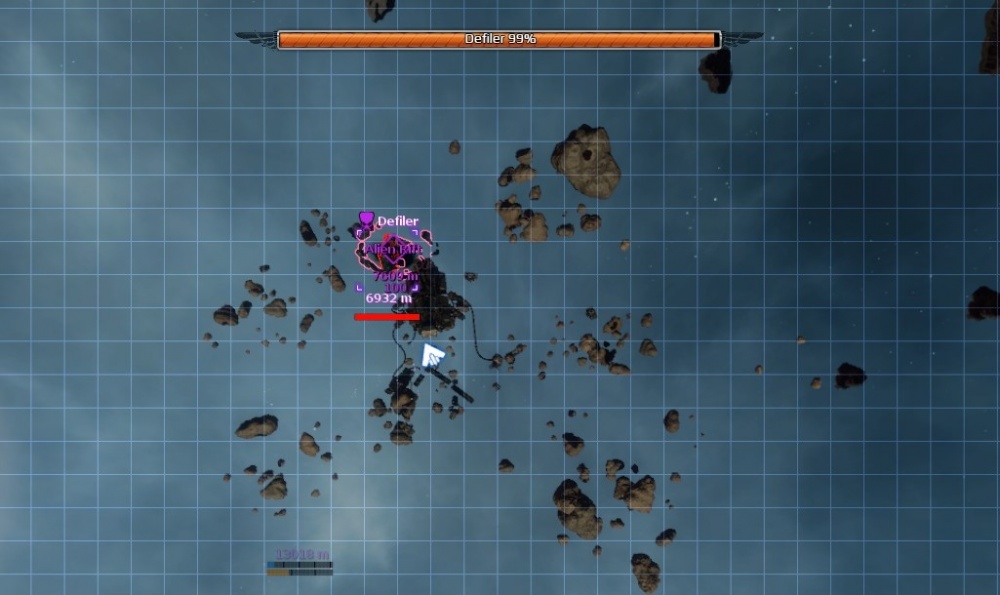