Difference between revisions of "Vigilant" 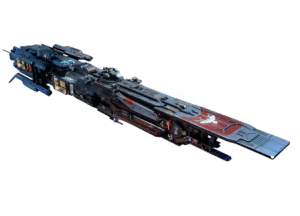 A beautiful example of imperial ship production, the destroyer Vigilant was developed by order of the Inquisition, as a response to sharply increased activity of the Revenant cult. The project was personally supervised by special agent Miranda del Arte. The Inquisition is well acquainted with the activities of the Order. The two organizations that since have undergone a huge metamorphosis, faced each other in the days of the old Direktoriua. Despite the initially narrow specification, Vigilant proved to be a versatile combat machine. It was soon adopted and the blueprints have been presented to UMC.

If you keep the beam on the target for more than 0.5 sec., all enemies within a 700 m. radius receive additional damage for 5 seconds.

Produces a self-propelled mine activated with a collision or on a timer. After activation the mine is invisible. Triggers if the target is moving away from it within a detonation radius of 500 meters or after 120 seconds.

Decreases resistance to damage for all enemies within a radius of 2200 meters. You can mount only one modifier of this type.