The following is based on this guide. Viewing the original might be of interest. Ask around on the forums or in your corporation if you have questions.

Give the Sector_Conquest page a read first.

Good ways to maximize your efficiency include:

When playing against bots or with a significant advantage (anything less than 6v10):

Reasoning for this methodology:

Capturing Command Tower first gives the most points and will cause the combat drones to stop spawning and limit the bot Thar’Ga respawn rate. The rest of the points can easily be taken by systems and structures and the bots do not need to spawn more than 5 times. Capturing Shield Emitter second allows the allied dreadnought's major calibers to do more damage. Additionally, waiting to plant a bomb allows us to do 100 more damage to the enemy dreadnought. Always save Weapon Cooler for the last capture, since it does the least overall damage and it is not worth investing time to capture the Weapon Cooler, since the tactical advantage it gives (the enemy dreadnought's Major Calibers do less damage to our dreadnought) is not relevant to a battle when you have a significant advantage.

At least one Sniper is mandatory, make sure one of the group’s players are on an empire LRF. Jericho LRFs are considered undesirable in almost all circumstances and should be avoided. As an LRF, your primary target is torpedoes, and, if the enemy dreadnought lacks torpedoes, you could switch potentially switch ships. You must lock on to torpedoes before firing, since they are essentially impossible to hit without aim assist. Your second priority is turrets on the dreadnought, since this will allow your lighter ships to engage the enemy with greater ease. Finally, you can shoot at enemy engineers and destroyers in order to keep their healers busy and their destroyers at medium HP. All snipers should use Overclocked CPU.

Callouts are communicating information in voice chat. Most wings will fly with some form of voice communication. In general, callouts are given to alert all players in the wing that their attention should be directed towards what you are calling. Therefore, this should be reserved for: events regarding bomb planting (both offensive and defensive bombs), the defense of your dreadnaught’s main systems (command tower, weapon cooler, or shield emitter), the defense of your engineer, or the overextension of enemy players. Callouts may also be given for heals to help your engineer realize that you are low on health. In certain situations, it may be useful to call out certain important cooldowns, like the Pilgrim’s Camouflage Shroud or Waz’Got’s Green Mist (if they are using this), or the command to begin attacking priority targets like a Tackler, Engineer, or a generally overextended player from their corporation. In most other cases, targets should mostly be called out by your tackler, as they will create the real opportunity to kill players.

Due to the chaotic nature of voice communication in games and the game mode itself, it is expected that players will use their best judgement before speaking, as it can severely dampen the entire wing’s ability to communicate if there is too much noise.

Because Sector Conquest is a fundamentally different game mode with certain limitations (like a lack of static cover and greatly reduced sensor range), there are certain things that both the entire wing and individual pilots should consider.

Ships that are considered absolutely necessary in every wing

Before forming wings or even thinking about strategy, you should run a checklist of the “necessary” components of a wing. Lacking these ships will severely dampen your overall performance on both a tactical and strategic level.

I am a new player and do not have any high-tier ships for Sector Conquest. What should I do?

At the current time of writing, the easiest high-tier ships to start off with in Sector Conquest are the Wolfhound and any LRF. The Wolfhound should be your goal for the manufacturable ships, with Granite and Project 1011 as secondary goals. Archdragon is considered viable and a strong silver ship, as is the Lion Mk II. Cheaper frigates and destroyers are largely not useful in this game mode so continuing to pursue them is not recommended.

Additionally, try to play some games as the game mode is highly rewarding and it will help build your experience. Even playing in T3 will give you similar amounts of rewards from mail and much-needed familiarity.

You can approach countering these strategies in many ways: you can try to mirror them, try to utilize direct counters (which may or may not work if, for example, you deploy a Pilgrim, but it dies to their kill squads), or utilize indirect counters like counter-attacks or just plain dogfighting.

A hallmark of a great wing is the ability to adopt new strategies. The thing about any games’ particular meta is that it evolves over time and plays off of itself: if one strategy becomes extremely common in any meta, the direct counters will gradually increase in strength and presence in the meta. For example: if tacklers become too prevalent, abilities to reveal them while in stealth will become more used, crew settings will adapt to counter tackler effects, engineers will place higher priority on certain modules, Granite’s relative strength will increase because of its Antisabotage 2.1 module, and other effects in the meta that will cause tacklers to have been “countered’ or “figured out” and lead to their downfall in the meta even without any balance changes. Therefore, it is important that your wing not only experiments with many different strategies in order to have experience with things that may not be strong now but will be later, but also that you experiment against different strategies. Learning these strategies might be difficult, but it’s important that as a player you employ a growth mindset (a mindset where, instead of criticizing others or defending yourself for your failures, you acknowledge your own mistakes and try to not repeat them, or analyze what aided your successes and repeat them. There might be external reasons for your failures but a growth mindset will not focus on them) when learning to fly new ships or new styles. Additionally, leaders should evaluate whether players are ready to be trained to play other roles, or if the benefit is worth the cost to the player. If a leader can not be giving this training for any reason, someone should take this responsibility and train the player.

Essentially, these scenarios are divided into two categories: either your fleet is limited in the ships they are taking, or your pilots lack the tactical or mechanical knowledge in order to fly the ships they need to be flying. This is an extreme generalization because all analyses of strategies are quite high up the ladder of abstraction in a game and there are so many individual factors at play that it would be impossible to consider them all. It’s important to realize that any combination of these individual factors could lead to a result that the guide isn’t telling you would happen, maybe ships aren’t upgraded so they lose every dogfight due to being inferior, or just get killed in some all-out slugfest. It’s mostly on the leader to quickly and accurately evaluate the reason the wing is not performing well and try to fix it, preferable during battle if possible.

In order to understand how to make an effective build for Sector Conquest, it is important to understand the tactical role you are fulfilling, and the tenants of that role that make the ships flying it effective. For example, as an engineer, your primary tactical role is to heal your team, therefore, it is not recommended that you run Heavy Blaster on engineer.

These are basically cookie cutter and somewhat customizable but most of the core items should stay the same if you want to replicate the same style these builds use. Note that there are many options for ship builds, some are more optimal than others, but you should do your own experimentation to find what’s best for you. I don’t claim to think that these are the best builds, but they can be good starting points for at least good builds. Experiment with what is best for you, but use your best judgement in order to not become dead weight in the wing with a bad build.

This is a build used by battlestarsc2. This is a suggested build for beginners and is not necessarily the "best" build. Note that you should only use regenerative coating if you will not have a Waz’Got on your team, and it is highly optional. Otherwise, Lightweight Hull is preferred. Crystal Plates is also recommended by some people. In any case, your Hull modifiers are the most flexible. Regenerative Coating can work with Wounded Beast Protocol because if you are in actual need of the stats Wounded Beast Protocol gives you, the Regenerative Coating will not cause them to go away.

Some people run with adaptive shield instead of EM resistance. This is up to your personal preference, but the advantage of EM resistance is taking less damage from other Wolfhounds in dogfights, while adaptive shield will help against all enemies until you get hit by a tackler. I use Auxiliary Shield Generator to increase my particle purge damage (which scales linearly with shield volume) to help deal with pesky interceptors or other agile targets, especially since sometimes you will have to hunt Covert Ops if your wing does not have someone else more equipped for this job.

If playing with high ping, double vernier is generally not a good idea - you won’t be able to maintain control of your rotation. If you have low ping, you could opt for more maneuverability with Lightweight Hull and Submatter Shields.

As always, you should take this build as a suggestion. Feel free to build as you choose.

As for the crew settings, there are certain “unpopular choices” and possible substitutions, but, in general, this is highly customizable. It is not recommend to change 5a, 8b, 9c, and 14a, but you can if you wish, however, these seem to be the most optimal choices in their rank:

Long range build based around Crystal Predator and Gauss Cannons 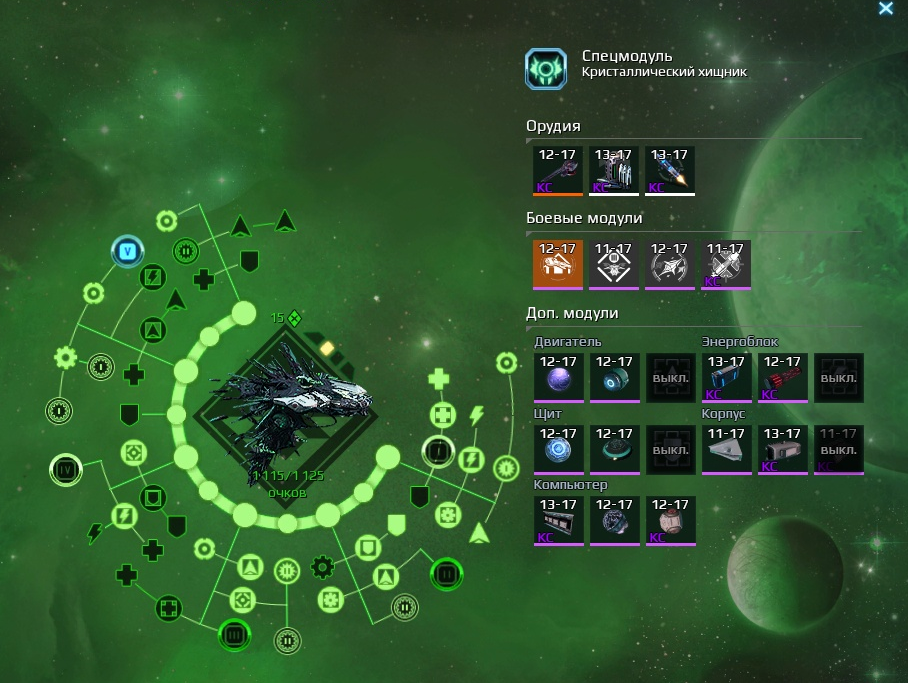 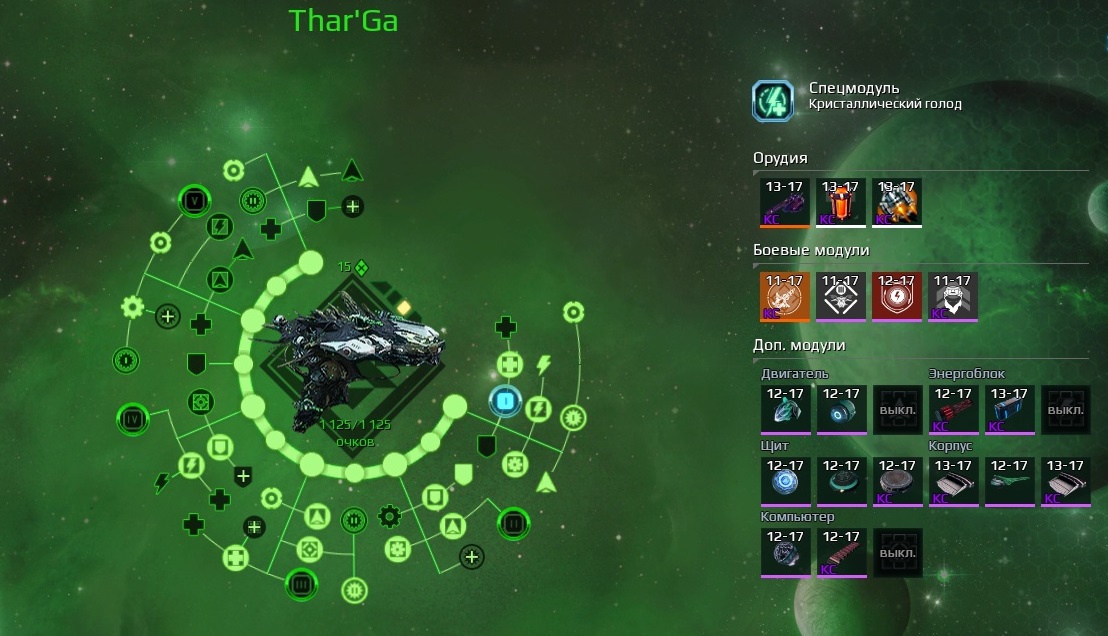 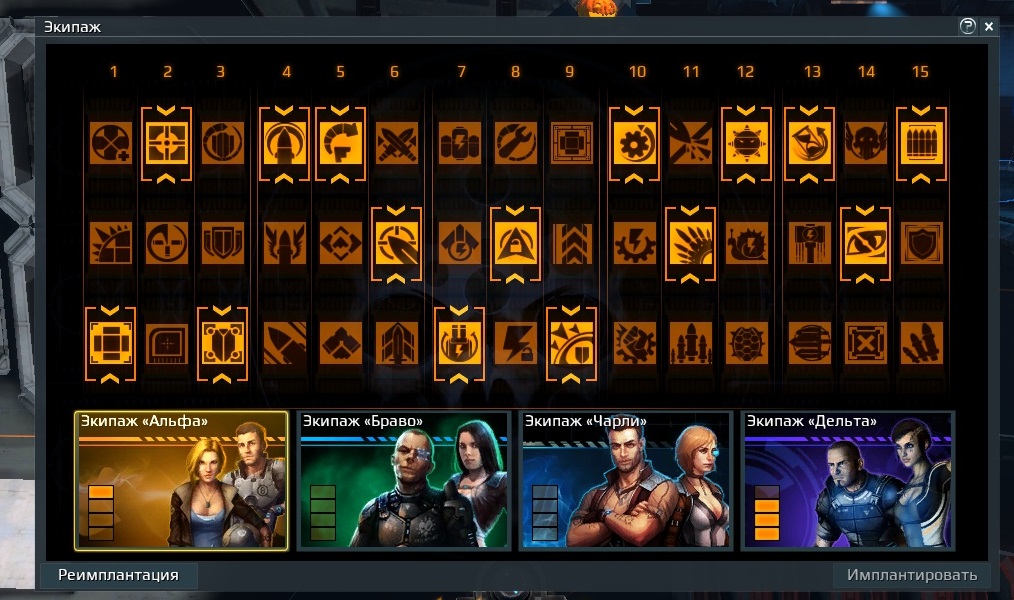 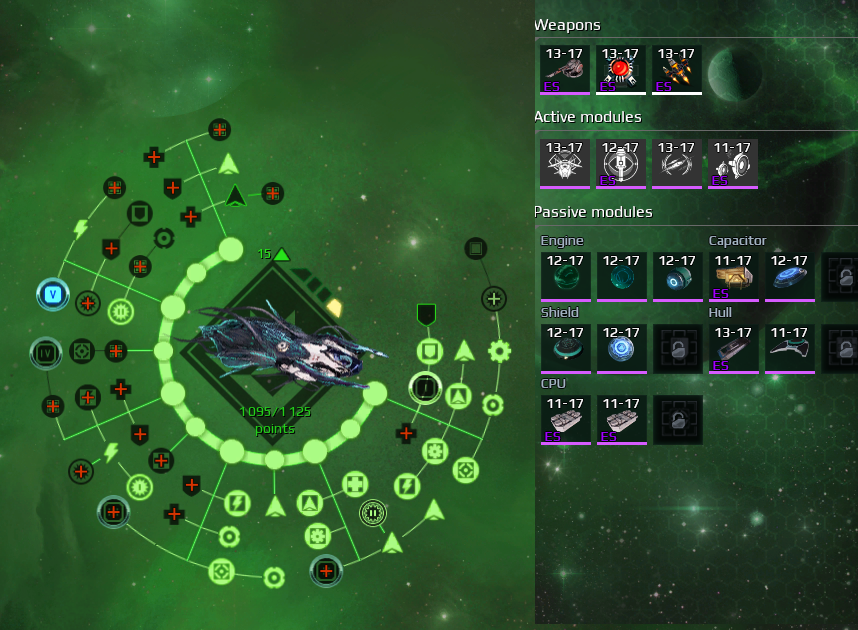