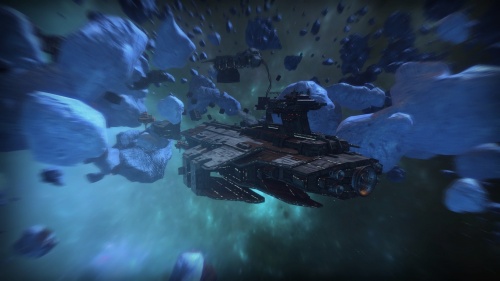 The Cartel has made great effort to attack the Federation systems, as they have a powerful fleet of ships in their possession. During the invasion, the Aliens attacked the Cartel flagship — it was seriously damaged, yet still retained combat capability... The Cartel is repairing the Dreadnought to continue the attack. And we don't want that to happen, do we? Since all the Federation fleet forces have been sent to defend the systems from the invasion, it is vital to prevent the Cartel from restoring the dreadnought and using it to continue attacks on our positions.

Requires players to take down 10 Missile defense turrets, they fire missiles at high velocity dealing thermal damage, they will also be defended by numerous plasma turrets and Cartels ships.

Requires players to capture 3 beacons which are defended by other Cartel ships and turrets.

The last stage requires players to take down the Cartel Destroyer (Jericho frigate ship model, not related to the suppressor class). It has a powerful Singularity Cannon, not as powerful as the Baron's one, but with higher firerate and projectile speed.

On the first stage LRFs are recommended for sniping down the turrets, the second stage, Recons are best for beacon capture, as for the last stage, Engineers are advised for their healing abilities.