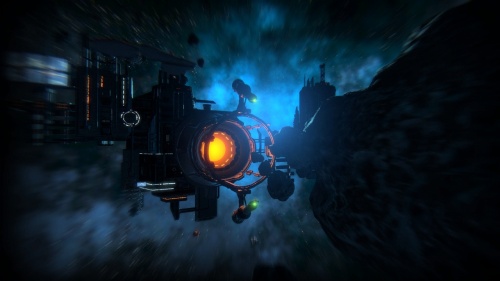 Mining rig is a key object bringing profits to its owners. It's not just an important part of the sectors resource base — it is also used as an outpost. Cartel forces have been trying to capture it for a long time to reap the credits and move deeper into Federation zones. Finally, when the Federation sectors were invaded by Aliens, the Cartel seized the opportunity to capture the station together with a cargo ship, and started building up defenses. Losing the station means undermining the Federation's economic potential in the nearby systems, affecting the fight with Aliens. This is why regaining control of the station is an important mission trusted to the mercenaries.

Requires players to stop the cargo ships from entering the station, they will have escort so beware!

Requires players to disable the missile defense system, there will be also plasma turrets and a lot of NPCs to defend them.

The last stage requires players to escort 3 transport ship to the warpgate, if any of them gets to be destroyed, the mission will fail.

Gunships are recommended for this mission, both in firepower and mobility, perfect for all of the stages! Engineers are required for healing transports in 3rd stage.