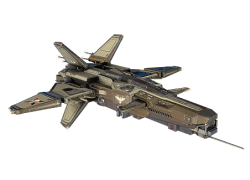 The first fighter, entirely developed after the proclamation of the Empire. Actively used in battles with invading Jericho and with the newly formed Federation. Separate units armed with AK-12 "Deimos" participated in the Third War for the Bartle Sector. At present, these fighters are considered obsolete and are derived from the combat strength of the imperial space fleet.