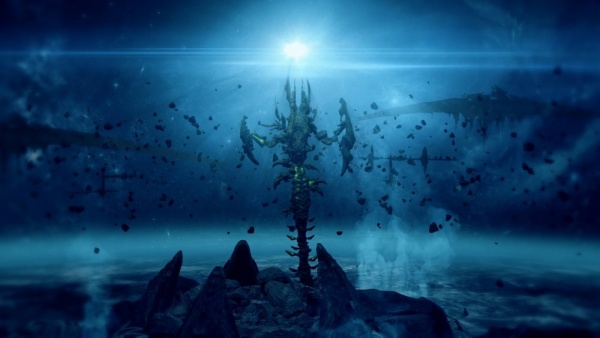 At the end of last year, Ellydium strengthened its fleet with the latest experimental dreadnought. The new flagship was to demonstrate the strength of the corporation and its financial capabilities to all competitors in the fringe sectors.

But during its first flight, the crew of the ship was faced with big problems. From the campaign, which was planned as a cakewalk and a show of force, the ship returned badly damaged. And the successful return of the Dreadnought was only possible thanks to the help that the mercenaries provided.

The dreadnought not only encountered a previously unseen enemy that dealt heavy damage to the ship but also the betrayal of old friends.

After the latest Ellydium dreadnought “Defiant” managed to return to its base at the "Pilgrim-11" complex, the data it received were processed by the specialists of the corporation. It turned out that in the first experimental flight the dreadnought faced a new kind of crystallid, called the “Devourer”, for its incredible size, features and firepower. It seems that we saw a sample of new alien technologies. Perhaps it is a kind of fusion of crystallids and biones. The scientists of the Ellydium Corporation cannot stand aside and are assembling a new Expedition to the Devourer's habitat.

The UMC, on behalf of Ellydium, announces a special contract for the protection of an expedition to all mercenaries. The contract is valid for groups of 10 to 12 pilots. The pilots' task is to cover the Dreadnought “Defiant” for the time necessary for scientists to obtain scientific data. Act together with the team of the dreadnought, that previously met with the monster and survived! Good luck! 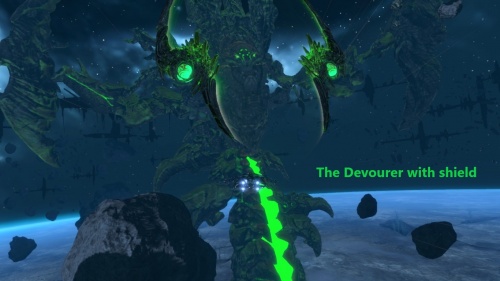 The Devourer is the colossal size ship of the crystallides. Its dimensions are calculated in tens of kilometers.

The Devourer appears with a huge shield when the dreadnought's main-caliber destroys the Defiler. The shield must be destroyed by shooting down 2 crystalline growths on the sides. The Devourer moves up and down, making it difficult to knock them down.

When the shield is knocked down, the Devourer hides in the planet and its tongue crawls out. Dreadnought moves around the map. 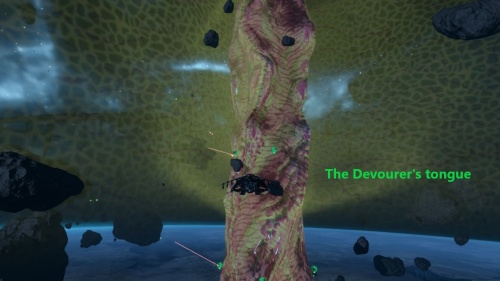 The “tongue” rotates, and the energy pillars from its 4 sides deal great thermal damage. There are emitters at the tongue which deal EM damage. They need to be knocked down, and the pearls from the appeared biomorphs (6 pcs.) should be brought to the back of the dreadnought to enhance the main caliber shot to the Devourer. When all emitters are shot down, the Devourer will hide its tongue.

Then the Devourer appears itself, again with a shield that must be knocked down. At this time, it is still possible to load the pearls, and after that, flying up to the marked main caliber, activate it. The caliber can be activated only after demolishing the Devourer's shield.

During the activation of the caliber, the Devourer can strike with its claw, holding it over the dreadnought. A claw inflicts tremendous kinetic damage that destroys any ship except the dreadnought. You can protect yourself with modules that give invulnerability. Also, if you have time to recharge the caliber before hitting the claw, there will be no hitting. If the dreadnought strikes both claws to the Devourer, the blow will not follow either.

During the activation of the caliber it is worth paying attention to the ships of the Aliens: with their shots they can knock down the main calibers, and the mission will fail. For their repairing it is necessary to have 1-2 engineering frigates.

After a while, the Devourer will again hide in the planet and stick out its “tongue”. Dreadnought each time after this changes its position on the map.

To win, the dreadnought must give the monster 3 shots from the main caliber, at least 2 of which must be reinforced with 6 pearls (+1 at the very beginning without amplification, too).

The first - to destroy the forces of Aliens. Enemies arrive in the sector in small groups: first biomorphs, then Hunters.

The second - the Defiler appears from the rift, and Ellydium dreadnought "Defiant" arrives in the sector, which destroys him with 3 volleys of the main caliber.

The third - the Devourer, covered with a shield, crawls out of the planet. To destroy the shield, you need to bring down 2 crystalline growths. Hunters and Predators appear. It is necessary to activate the main caliber for the first salvo on the Devourer.

The fourth - the Devourer is hiding, and a huge "tongue" is hanging out of the planet, hung with emitters. They must be knocked down, and they will turn into biomorphs. If a biomorph is killed, pearls will fall out of it.

The fifth - the Devourer hides his "tongue" and again gets out himself, with a shield that must be knocked down. It is necessary to load the pearls into the dreadnought's stern and recharge its caliber. Caliber gives a volley on the monster. Repeat 3 times.

Mercenaries. For successful completion, you will need gunship fighters with powerful laser weapons to burn out growths and Aliens, as well as several engineering frigates for repairing dreadnought calibers and allies.

It is necessary to think about protection. EM resistance (EM-diffuser, EM-insulation), since the enemy mainly uses EM weapons, as well as thermal resistance (Thermal Modulator, Thermal Insulator) to protect against the energy pillars of "tongue".

Modules that give invulnerability, for example, Combat Reboot and Emergency Barrier, will be useful for protection against claws.

If the team manages to fulfill the mission objectives and succeed in stopping the Devourer, the mission will reward each player with 3 rare loot searches that can grant different amount of 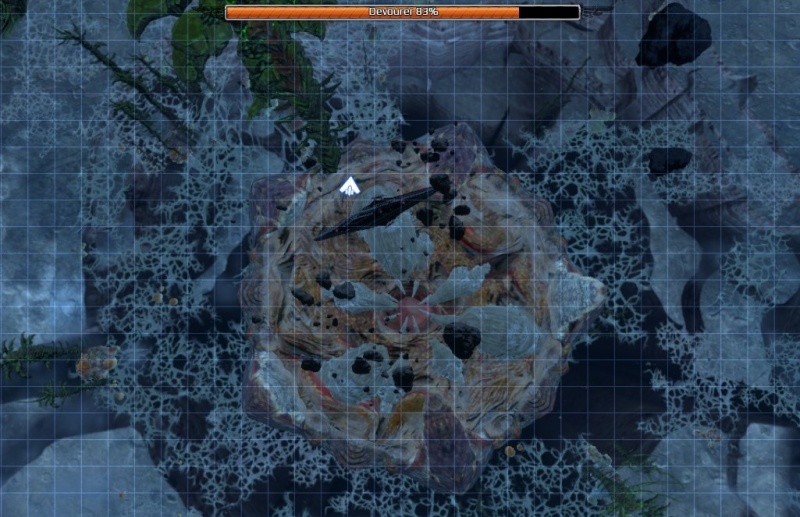