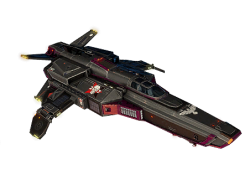 Available from the beginning:
Main weapon damage increased by 15%.
Reloading rate of "Gunship modules" reduced by 20%.

After the invasion, Imperial Design Bureau took note of the complaints of the pilots on control precision and combat abilities of Hercules series fighters, resulting in a developed an updated version called Ghost. Vessels has proven themselves as a reliable and powerful machines during testing, satisfying the most demanding pilots.

The module launches a projectile, generating a cloud of high-energy radiation, which eventually increases its size.