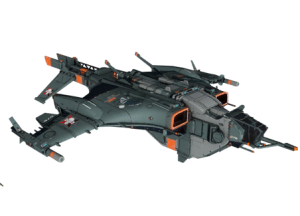 Granite received its name in honour of the granite stones of memory, in which the names of those who gave their lives for the Emperor are engraved. Like those stones, these ships bear the memory of the fallen. At the beginning of their journey, they were simple and unpretentious support machines. But every fight and every death made their own adjustments to their design. Engineers of Martian Laboratories created new designs, based on pilot reports and their combat experience.

When a target is hit, the activated special module's effect is extended for each accurate shot.

Any effect intended to scramble your ship's control and applied when the module is active, is blocked. The target's hull and shield resistances temporarily increase, while the remaining module active time is reduced.

If a friendly or a hostile ship is destroyed in nearby range, allies' rate of fire temporarily increases. You can place only one modifier.