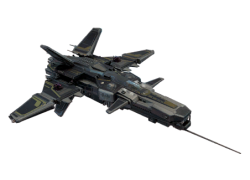 The most massive fighter of the imperial Warden Order. For a long time it was the basis of both the Emperor's personal fleet and the Fleet of Earth Preservers. It was widely used in the Civil War and in subsequent conflicts with the Federation. It is in service, although no longer produced.