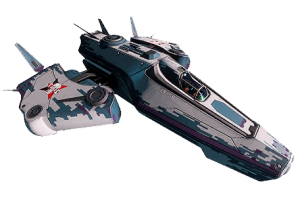 Irbis is the latest fighter of the “Fortress” shipyard, designed for the security needs of the Armada’s corporate security and police forces. The development process was based on the experience of the previous generation of ships in this role, allowing the engineers to create a tackler without any apparent flaws.

Currently, a contract has been signed between the Fortress Shipyard and UMC for the supply of Irbis. The first ships received are already being used by mercenaries to escort VIPs and to destroy lone pirates. According to the manufacturer’s shipyard management, the fighter is also suitable for conventional combat.

A deadly thermal charging weapon. As the charge accumulates, its damage increases but its spread increases as well. Critical hit decreases the target's rotation speed.

When activated, the special module boosts shield and hull regeneration. Passively increases energy regeneration. You can place only one modifier.