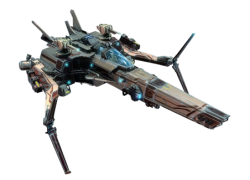 Veteran of the war for Bartle sector. Designers took the existing design as a basis, improving its maneuverability. Interceptors of this model are often involved in exhibition flights and parades.

Like ‘Palom’, it returned to take part in combat missions since the beginning of the invasion. Quickly became one of the most popular vessels for reconnaissance and data transfer between neighbouring colonies to coordinate patrols and blocking detachments.

Launches a charge that adheres to the enemy and deals damage. Several charges can adhere to a single opponent.