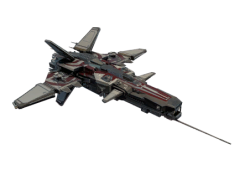 After the sabotage that took place at the Legion shipyards under the leadership of the Federation, the Deimos 2 fighter was no longer delivered to the regular fleet. As a result of the shortage of ships of this type, by decree of the Warden Order, the Martian laboratories quickly produced a modernized version of the gunship. Phobos became the main striking force of the Order for many years, and its production was quickly boosted. Later, this ship was used by the Legion in reconnaissance operations and attacks on the Federation. As a result, after the restored production of Deimos 2, few pilots used the old fighter again. Mercenaries also appreciated Phobos and even noted the excellent steering balance. The last major use of this ship was the defence of the mining station Thunder-4, where the fleet, consisting entirely of ships of the Phobos type, perfectly restrained the attacks of aliens.