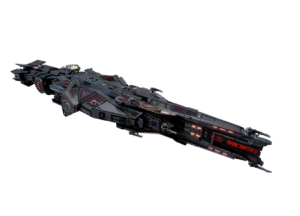 Jericho destroyer, Tyrant was created in XLII century, shortly before the third Bartle sector war. It was created under the watchful eye of the Oracles to oppose the imperial Invincible. The powerful Tyrant was used in conjunction with low-tonnage vessels during raids on undefended colonies deep in the rear of the former ‘Direktorium’. Despite the age of the destroyer, most of its parameters are up to modern standards, and in some ways even surpass them.