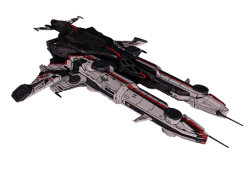 The latest AK-20 Veils fighter was developed in the laboratories of the New Empire. The ship is designed to effectively wage war with Aliens on the periphery.

Designed from scratch, the Indra-T reactor significantly increased the power of system overcharge, and reinforced armour will withstand thousands of hits.

Currently, the New Empire has supplied more than a hundred of these ships to its army, as well as sold several shipments of Veils to the Northern Empire.

Thanks to a new contract with UMC, mercenaries can order the new fighter to fight Aliens.