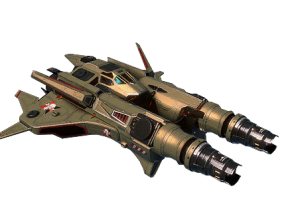 Recon ships must infiltrate the enemy ranks and locate their ships. A special module allows them to move around quickly. They also boast increased radar range and object capture speed.

Built for combat recon in extreme conditions, the prototype of ‘Cyning’ was the only ship to survive the Alien attack on Empire's 112th Design Bureau. Equipped with only basic weapons, "Cyning" was able to knock down several attacking ships, after which he fled from prosecution. Fortunately, the engineers responsible for the project were saved on its board, and with them all the documentation. Once safe, the engineers first of all made several amendments to their records and only after that went to medical rehabilitation. Soon non-serial production of this model for the needs of intelligence was established. The drawings were sent to the Mercenary Center specifically for pilots loyal to the Empire.