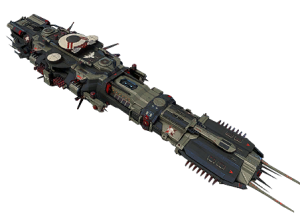 One of the worst military failures in the history of the Empire is rightly considered to be the third war for the Bartle sector. It was then that the scientific elite of the Wardens, loyal guardians of the Emperor, had the idea of using the enemy's own weapons against them. They created the 1011 series ships, equipped with limited AI. According to the idea, they had to explore the distant sectors without pilots and give the Empire an advantage in the future war. Though some say that the goal of the project was actually to find the source of the Signal. The Imperial Fleet gave away old frigates, left from the time of the Direktorium, to the project. They were numerous and in those years frigates were considered ineffective. Equipped with automatic repair and self-upgrade systems, the ships launched towards uncharted space. Then the Invasion began and project 1011 was forgotten.

And now, hundreds of years later they returned. Beaten in unknown fights, changed beyond recognition, bearing age-old wisdom and secrets of the space.

Enemies hit by this weapon temporarily lose the ability to lock targets.

Locks multiple targets in a cone and starts accumulating a charge. When charge accumulation is completed, a volley is launched. Secondary activation of the module launches an early volley.

Increases disintegrator rate of fire. You can only mount one modifier per ship.