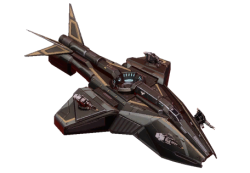 The exact origin of Thor is unknown. According to rumours, the fighter was developed by the scientists of Martian laboratories before the First Invasion and was later transferred to the Inquisition. The ship’s existence was kept secret for a long time until the blueprints of Thor were received by the New Empire in 4621.

Soon the imperial pilots tested the ship in combat. AK-107 Thor squadrons carried out swift strikes against pirate bases, destroying superior marauding forces. The excellent combination of weapons, active modules and the ISES-13T onboard system makes this fighter a dangerous opponent in any battle.

Currently, with the permission of the Inquisition, the New Empire is preparing Thor for mass production. The UMC mercenaries will be able to get a weakened version of the gunship under a special contract.

Increases hull durability and hull resistance to all damage. If the hull durability is less than 50%, generates a powerful electromagnetic wave that deals EM damage and blocks the control systems of enemy ships. You can place only one modifier.