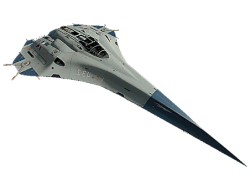 The war with Aliens ruined many companies of the former Federation, brought death and destruction to remote systems. But those who managed to stay afloat, got their hands on the projects of their broke competitors for next to nothing. For Sci-Tech Universal, a corporation that rose from the ashes of the war, one of such acquisitions was the project Boremys — an improved version of the guard frigate Archelon.

The revitalized project started off slow: there was a lack of parts for production, the ship's outdated software had no modern alternatives, and the team lacked qualified engineers. Many people simply fled from the fringe systems after the Invasion, and it turned out that there was nobody left around to finish Boremys. To avoid further financial losses, Sci-Tech contemplated abandoning the project. But help came from an unexpected ally.

By oversight, the blueprints of Boremys fell into the hands of a refugee engineer whose studies were cut short because of the war. He worked out the kinks in the schemes and proposed innovative solutions, while the problem with the lack of resources was solved by new investors, who were interested in the ambitious project. This is how project Boremys saw the light.

If one of the projectiles hits the target, the rest of the volley is automatically guided towards the target.

Launches a projectile that pulls the target towards itself when passing close by.

Reduces module cooldown time. Activating any active or special module reduces the ship’s speed. Only one modifier of this type can be active.