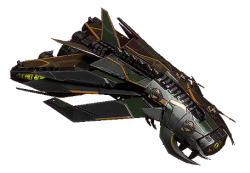 Naglfar is a miracle of the Sentinels. Supposedly, such ships were designed for the expedition to sector 1337. Soon after, they disappeared.

Among the mercenaries, it is rumored that a single ship of this kind caused the destruction of an entire UMC station. It returned from the expedition defiled, as if it itself had become an artifact of the Precursors. The people around the artifact were going insane. They were killing themselves to end the suffering.

One mercenary met the Sentinel and survived. He called him Naglfar and became a faithful comrade to him. Since then, other ships of this kind have begun to emerge. Fearless mercenaries are not afraid of rumors and make contact with the ships. Perhaps their minds are also protected from ancient curses.

If the enemy is destroyed after being hit, the player’s ship receives damage resistance for some time.

Increases resistance for each ally within a small radius. Additionally, it significantly increases shield damage resistance and accelerates the ship for a short time.