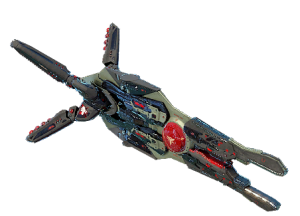 A terrible tragedy befell the Great Jericho Family Liu in the early years of the Invasion. Monolith — the family ark city was infected with a terrible biomorph virus. The disease, which destroyed almost all of the Family, was called the Liu Virus, in tribute to the tragedy. Since then, Monolith remained a grim reminder of the horrors of the Invasion. The surviving members of the Family, without their home, became eternal exiles. The departed among the departed. Many of them were then given refuge by the UMC.

But after the disappearance of the greater part of Jericho, something clicked in the depths of the cursed ark. The ancient automatics came to life again, and soon new ships appeared. Zhen is the first of them. A masterpiece of an ancient master who perished in a tragedy. Guided by limited AI, these interceptors attack anyone who approaches them. Anyone but Liu's heirs. Many regarded it as a sign sent by Bartle. The family reunited. They find the ships wandering through space, clear them of the remnants of the virus and ship them to the UMC. The Liu remember that mercenaries are the only ones who did not turn away from them in the tragic hour.

A course gun with kinetic damage. Shoots in short bursts.

The enemy's afterburners are forced on and its maneuverability is reduced by 90%.

When ship durability is critical, it becomes invulnerable and prevents enemies from locking targets for for few seconds. You can place only one modifier.